We are truly honored to be releasing Misfit Scarecrow - the first album released by Sammy Walker in over twelve years.  Sammy Walker was born in 1952 and grew up in Norcross, Georgia.  Sammy began singing and writing original tunes at an early age while being heavily influenced by Woody Guthrie, Hank Williams and Doc Watson. He began performing these songs in coffee houses around the University of Georgia in the early 70's.   In 1974, Sammy Walker sent a homemade tape of some of his songs to Sis and Gordon Friesen at Broadside, where they were well received and subsequently published.  As a result of Gordon's giving a copy of the tape to Bob Fass at WBAI radio in New York City,  Walker was invited to New York to appear on Fass's show.  Phil Ochs heard him for the first time on this show, and the two soon met and exchanged songs and stories.  Within two months, Ochs had arranged the recording of Sammy's album for Folkways, and convinced Warner Brothers to sign him for two records.   Ochs produced Sammy's first album for Folkways.  It was called "Song For Patty" and featured newspaper heiress Patty Hearst on the cover of the album.   Sammy recorded two superb albums for Warner Bros. that were produced by legendary producer Nik Venet.   Walker was managed by the late Harold Leventhal (manager of Woody Guthrie, The Weavers, Pete Seeger, etc...).  Walker currently lives in the western part of North Carolina. 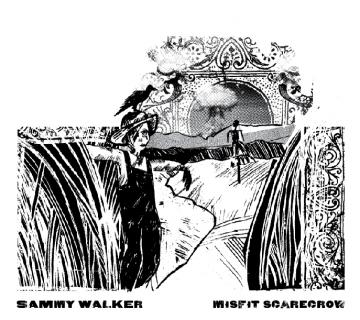